Posted on January 31, 2019 by pomegranateandchintz

Hello Dear Peeps, I’m back!  I’ve missed you and missed blogging and can’t believe it’s already the end of January.  My brain is stuck at 4th January; at that date I looked ahead and saw weeks of laid back holiday time, but it was not to be.  Here’s how my January has unfolded (it’s a bit long now it’s done so grab a cuppa first…….ready?  Here we go.)

:: I went up to see Mum on 9th November and found her to be a little poorly.  After going to see her doctor and confirming that she did indeed have an infection, I packed her a bag and brought her home to stay with us.  Several visits to doctors and specialists, with accompanying tests, in Melbourne during the intervening months (as well as the diagnosis of a second infection) and their help have seen her improve, but not enough for her to return permanently to her home up north so, as a family, we’ve made the decision to move Mum into residential care here in Melbourne (about 10 minutes away and where The Golfer’s Dad was living).  Mum has been there for a week now and is enjoying herself, getting to know some of the other residents, and looking oh so much better.  And it’s so lovely to have her nearby; I took her out for a coffee this morning!  (Not something we could normally do when she was 2 hours drive away.)

::  It was great having Mum stay with us over those months.  As Mum improved we had mum/daughter days out and went clothes shopping (bought Mum a whole new Summer wardrobe!), went out for meals and coffees, went to the movies and saw “Mary Poppins Returns”, as well as making plans for her future.

:: In an effort to build Mum up, and because lettuce-tomato-cucumber type salad can get boring, I experimented using this freebie magazine as a guide

and we’ve enjoyed some super salads.  It’s been so easy to make them once I’d shopped properly and was prepared – think that’s the key!  Adding combinations of fruits, different cheeses, “exotic” things like prosciutto and olives and changing up dressings make all the difference to the word – and taste of – “salad”. 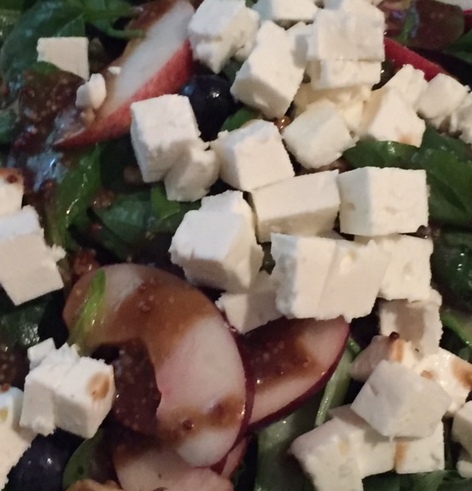 :: My imagined days of lounging on the couch under the air conditioner reading novels, or spending the cooler days sitting on the deck under the shade of the Claret Ash stitching were not to be.  It’s been SO HOT!  Days of brilliant blue skies and scorching sunshine.

Even with the air con on, some days have just been overwhelming, and once we were back home from appointments there was just no energy left for sewing.  I find Summer enervating at the best of times but this year I’ve found particularly bad.  I did do a bit of bingeing on “The Good Wife” viewing the first 2 seasons…..again.  Love that show!

::  With all our family happenings there hasn’t been much time for social sewing, in fact I think I’ve been to just 2 gatherings and not much sewing was done!  There was however the obligatory food which I know you love to see. 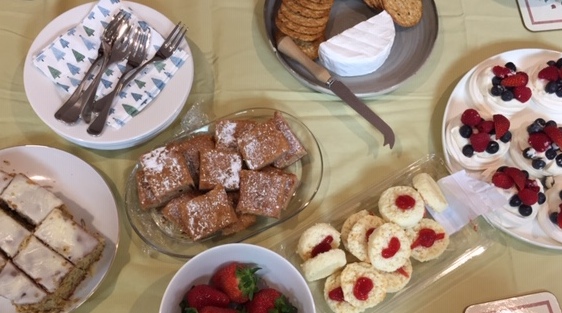 :: At the beginning of the year I was feeling at a bit of a loss not being able to concentrate on much and as the weather was cooler then I decided sock making would be the go.  As you do in the middle of Summer!  In about a week, I added these to the sock drawer.  I do love sock knitting!

::  We’ve had a couple of trips back north to Mum’s unit to pick up bits and pieces for her and have seen some spectacular sunsets – all heralds for very hot days up there!

Then last weekend The Golfer and I called in to the Rivers Outlet store in Bendigo on the way home and I bought these gorgeous gumboots which will be perfect for Winter gardening!

:: In November, Helen, Karen, Maree and I decided we’d like to join in with Lucy’s CAL which was to start in January so we ordered the yarn from the UK, which turned out to be surprisingly economical

and inside, all tucked up in its own see through bag were the yarns

and so we began 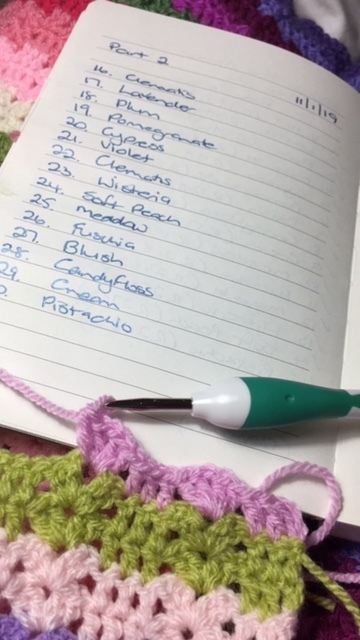 I’ve finished parts 1 and 2, but have stalled at part 3.  Helen is totally up to date, Karen was a late starter and I’m not sure where Maree is up to.  It’s been a fun, easy CAL and I’m loving how the colours are coming together.  Lucy certainly has the knack!

:: Late last year I booked a couple of days at the Sewn and Quilted Summer School, held in January.  They turned out to be such fun!  The first of my classes was with the fabulous Jo Dunsmuir (@frankieandray) from Frankie and Ray making “The Friday Shirt” with linen purchased from Frankie Stuart, and even though I was a bit trepidatious at first wondering if I could master this 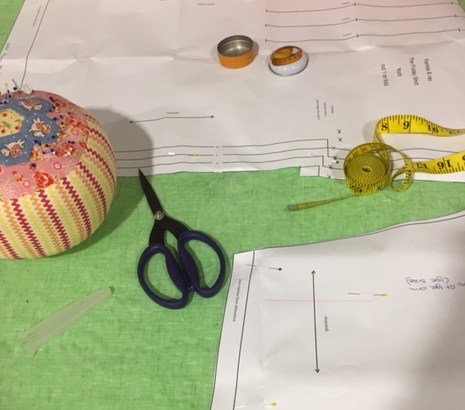 I finished it in class!  (I was just about to whip it off when I remembered to have a friend take a pic so it’s not on straight!)

So very pleased with it that I cut out another in class using Liberty fabric from Sewn and Quilted (they have a pop up shop at Summer School) and finished that at home using a sleeve hack from Jo.  (I was home alone and it was too hot to put it on!) 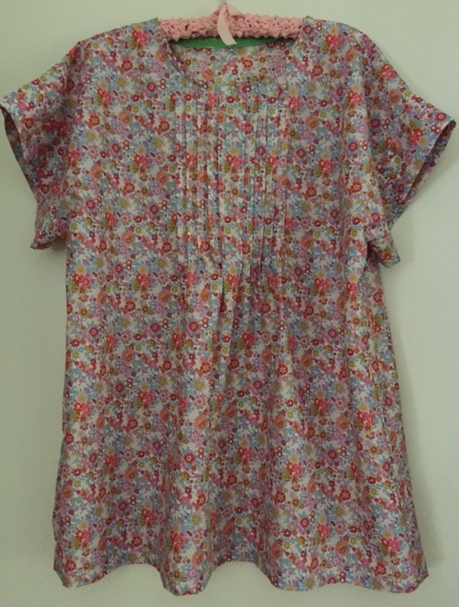 My second day was with my gorgeous friend GJ (@glendacust) which was hilarious and great fun as well as instructional!  Years ago Glenda had taught a class covering a wooden hexagon-shaped box.  I loved it, but wasn’t able to do the class so bought the kit with every good intention of making it on my own (yeah, right!).  This “free sewing” class making any of Glenda’s projects was perfect for getting me started with my box.  I love how the secondary star pattern has come out with the hexies!

I’ve since finished the glove stitch edging, but in class made headway on the hexies which will go around the sides of the box. 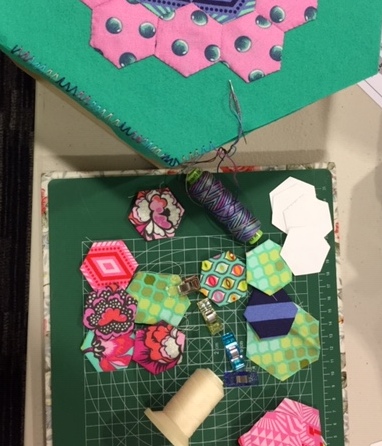 :: I did spent the better part of one day clearing out, sorting out and reorganising the left hand side of my sewing room and discovered 37 projects which freaked me out just a little!!!! (the right hand side is still waiting to be done.  Wonder why??)

That’s enough from me for today.  How was your Summer/Winter this January?  I hear there are some freezing weather conditions in the USA and there have been dabbles of snow in the UK, with more in Europe.  Here in Australia it seems so very strange when one end of our country is having fires, the other is having floods and in the middle there is drought.  Please take care, wherever you are.  I’ll be back soon.