Posted on January 13, 2016 by pomegranateandchintz

No doubt you’ve seen posts in blogland of late where bloggers, rather than making a New Year’s resolution have instead chosen a word to guide them through the year. As we’re almost half way through January (already??) either I’m late to the party or I’ve been thinking about this for quite some time………you decide!

Initially I’d thought I’d choose an esoteric word like “create” or something more practical like “sew”, but I do already create and I do already sew.

Then I started thinking about my sewing room clear up, the projects I re-discovered, then more broadly about how uncomfortable my clothes are at the moment (due to slacking off on the exercise front and comfort eating – all understandable given the events of last year) and realised there was a word that I really need to employ for a minimum of a year and that word is:

Body wise, I have started walking again, almost regularly, and I’m making an effort to eat better…….just hoping the result aren’t too slow in showing themselves!

So many projects are so close to finished. Why do I do this? I go full pelt, all keen and enthusiastic, then get distracted by something else and start the process again. I have to stop this dragonfly mentality – swoop in, hover, flit off – and get some things finished!

Case(s) in point:: I have a jelly roll from one of my favourite designers “Flow” by Zen Chic

and an idea for using it burst into my head last week. Mulling it over on the way home from Ma Kettle’s at the weekend I figured out the final details, arrived home, unloaded the car, jumped back in the car and drove to Sewn and Quilted to get some plains to go with it 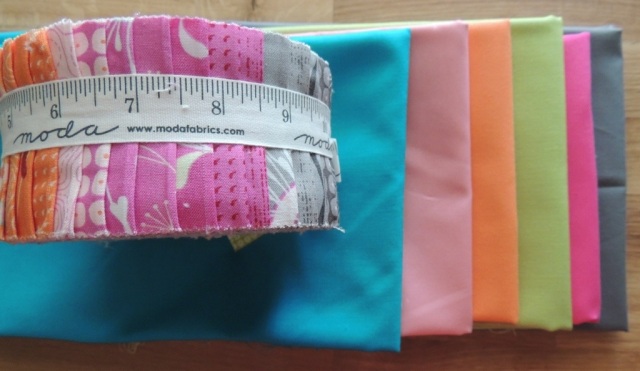 And while I was there, I finally gave in, resistance all gone, and picked up some Tilda ‘cos I love the Log Cabin quilt that’s been hanging in the shop for a couple of months. I’m blaming Marg (the maker who works at the shop) for this one!

Then there’s things like Audrey’s Quilty365, which I’m really enjoying, but a trifle obsessed with, and now the gorgeous Cecile is aiming to pull me in with another quilt along…….

The trouble is I have too many ideas in my head and I can’t sew quickly enough.

So (sew?) I need to discipline myself and try (try being the operative word!) to finish some things this year, work on something through to completion, get a top to quilting stage before starting something new. Stop laughing you lot! I said I’d “try”!!

But don’t expect to see any results in the immediate future, ‘cos in this household, ‘ere at p and c, January is holiday time and I’m relaxing, pootling about, and maybe even devising some new quilts (just on paper mind), and sewing circles…….

This entry was posted in Uncategorized and tagged fabric, projects, word. Bookmark the permalink.

Thank you for taking the time to comment - reading them makes my day! Cancel reply